Australian seniors who find themselves single are certainly not giving up on love and are turning to online dating with the support of their families, according to a new study released today by the Australian Seniors Insurance Agency.

Although traditional routes to finding love are still popular, more seniors are open to a digital dating approach. While navigating through the dating world, the majority of seniors say they prefer to be free to ‘play the field’ using online dating until they find the right person (63.2%) and would consider dating someone considerably younger (55.9%) than themselves.

The vast majority of seniors (82.6%) believe their peers are less likely to stay in unhappy relationships, with many enjoying the feeling of having more freedom when single compared to when in a relationship (86.3%). And, when comparing the state of play with their parents’ generation, more than three in four (76.1%) think the attitude and approach to relationships have changed for the better.

The Modern Dating report is the fifteenth instalment of The Australian Seniors Series – an ongoing national study that explores the shifting attitudes and concerns affecting Australia’s over 50s. This chapter delves into how seniors feel about online dating and re-entering the dating game.

Those embracing technologies are using dating apps frequently with South Australians leading the way with close to 3 in 5 (56.2%) using this technology two to three times a week, followed by nearly 2 in 5 (39.0%) seniors in New South Wales*.

“Our research shows that while most seniors feel as though dating doesn’t get easier with age, they are more open to new ways of connecting with people,” said, Simon Hovell, Australian Seniors Insurance Agency spokesperson. “The bonds they form, whether romantic or otherwise, are encouraging seniors to feel empowered as they choose which method they prefer to meet new people.”

Australian seniors are interested in forming in-depth connections that go beyond physical appearance. The vast majority are looking for a sense of humour (83.7%), companionship (78.5%), similar interests (61.3%) and an interesting personality (74.4%) in a potential partner as well as stability and reliability (66.0%) in the relationship itself. 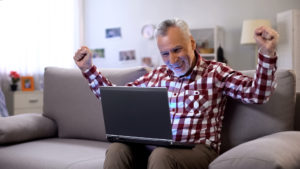 Senior man getting an answer to online dating

Despite the potential challenges, the majority of seniors are approaching dating later in life with an open and positive outlook. Seniors remain aware of the online scammers yet remain happy to use online websites and Apps to find companionship and love.

Get your Free Book from Dr Karen today to ensure you avoid any scammers and find that love online.

Further findings from the research:

Over half of dating seniors (56.8%) think the bill should be equally split between both parties for the first date, while one-fifth (21.4%) say the male

Get Dr Karen’s Free eBook on avoiding online dating scams to make sure you remain safe and alert.

Get Dr Karen’s Free eBook today, click above to get it now.